Sounds of the Eternal: Meditative Chants and Prayers CD 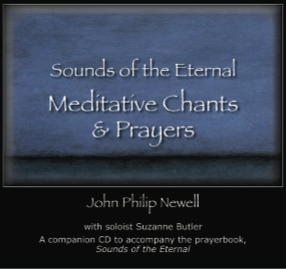 These rich prayers and chants are a companion to the book Sounds of the Eternal; the CD serves as an aid to awaken awareness of the goodness of creation and of the body. The prayers, inspired by Jewish and Celtic spirituality, are interspersed with an accompanying chant. The music and vocals of a Celtic and middle-eastern nature have been said to be “inspiring,” “strengthening,” “peaceful” and create a sense of “nearness.” Excellent for prayer and meditation groups, retreats and workshops. This CD, originally published in 2006, has a new cover which is inspired by the artwork of Tobi Kahn.

John Philip Newell is a Scottish poet and scholar with a passion for peace among the great wisdom traditions of humanity. He is internationally acclaimed for his work in the field of Celtic spirituality, having authored over 15 books, including Listening for the Heartbeat of God, Christ of the Celts: The Healing of Creation, and his most recent visionary work, A New Harmony: the Spirit, the Earth, & the Human Soul.

Suzanne Butler is from Edinburgh, Scotland. Listening and performing music were important to her from an early age. She graduated from Edinburgh University with a degree in Music. She has worked with the children’s charity Fischy Music, exploring self-esteem and emotions among children. Suzanne was also featured in another of John Philip Newell’s CDs, Chanting for Peace: Meditative Chants and Prayers.

Linda Larkin, composer, has performed in the Santa Fe area since 1996 and provides a wide variety of classical, popular, Celtic, Latin and sacred music. She performs at weddings, parties, conferences and memorial services. Linda holds a Masters Degree in music and maintains an active harp studio in Santa Fe. She has presented workshops at national conferences and co-led international pilgrimages. She is the founding director of High Desert Harps, a performing group of 10-12 harpists.

Sounds of the Eternal: Meditative Chants and Prayers