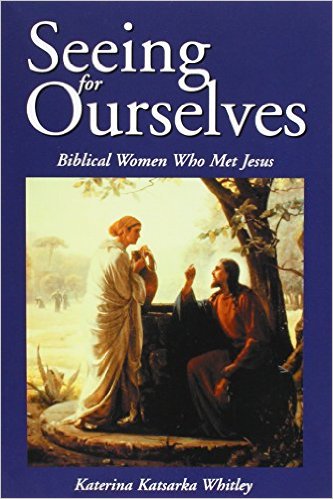 Katerina Whitley’s first book of biblical monologues, Speaking for Ourselves, has been received with enthusiastic praise. Now, in Seeing for Ourselves, Whitley gives powerful voice to the New Testament women who met Jesus both before and after the resurrection.

Included in this collection are: the woman at the well; the adulterous woman who was nearly stoned to death; Cleopas’s wife, whom Jesus may have met on the road to Emmaus; the woman who touched Jesus’ cloak in order to be healed; Mary and Martha; Phoebe; Prisca; Pilate’s wife; the bride at the wedding of Cana, and others.

Born in Thessaloniki, Greece, Katerina Katsarka came to the U. S. at 16 years of age to enter college. Her education focused on music and English literature and later on theology. She married Rudy Whitley and together they were confirmed in the Episcopal Church. In the four decades of her involvement with the church, Katerina has worked as diocesan and national church journalist as writer, photographer, and editor. She is the author of five books of biblical monologues and one Greek cookbook. She has taught children and adults of all ages and continues her ministry in leading retreats and in speaking to churches. She has two daughters and four grandchildren. She lives in Louisville, KY.

Seeing for Ourselves: Biblical Women Who Met Jesus