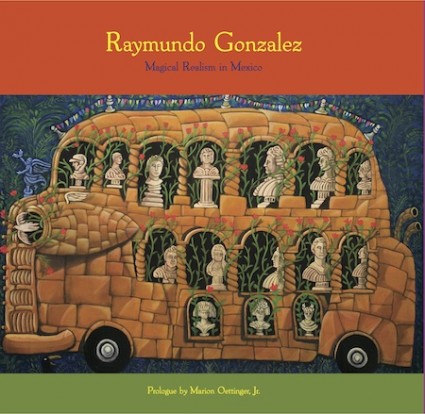 Cuernavaca, the “City of Eternal Springtime” serves as Raymundo Gonzalez’s blank canvas from which he paints and draws what he sees: a mix of Spanish and Indian cultures, fiestas, traditions, myths, and colors. His art captures these cultural images beautifully, giving the viewer a taste of both reality and fantasy. Gonzalez depicts the real side of Mexican culture with energy and life, yet manages to keep from stifling the viewer’s own imagination. This book is certainly a bright and rich addition to anyone’s home and will carry the hearts and minds of viewers into a playful and yet meaningful journey through a magical Mexico.

Raymundo Gonzalez was born in Guadalajara, Mexico on February 4, 1951. As a child he was exposed to the rich supply of architectural, cultural, and artistic displays that were part of his hometown. Borrowing from the influences of Guadalajara, it’s no surprise that Gonzalez pursued a life and career in the arts. Soon after receiving a degree in Art at the Academy of Art in Veracruz, Gonzalez graduated from the Autonomous University of Morelos’ School of Architecture. He began practicing architecture but continued painting and drawing all the while and ultimately made the transition from architect to full-time artist. Gonzalez currently lives and works in Cuernavaca, Mexico. He has participated in a number of exhibits in Mexico, Ireland, Holland and the United States. He has a permanent collection in Puerto Vallarta. For more information:
www.quetelate.com