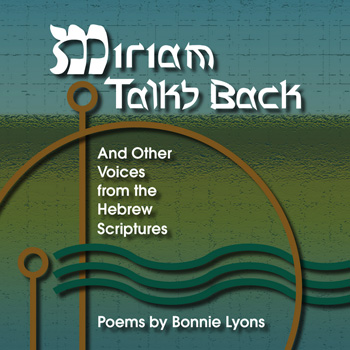 Miriam Talks Back: And Other Voices from the Hebrew Scriptures.

This is a deeply perceptive and powerful work. Lyons eloquently provides believable voices for myriad women—“good” and “bad,” Hebrew and non-Hebrew–in the Hebrew scriptures. In her poems these often silent and even unnamed females tell their own life stories as they see them and speak as real, complex women. God kills Job’s children as a test of his faith, but how would Job’s wife respond to these deaths? Lyons’s poems are an invitation into the world of the feminine and offer fascinating, new insights into the Hebrew scriptures.

Bonnie Lyons is the author of four books of poetry, including In Other Words, (Pecan Grove, 2004) where most of the poems recorded in this CD were published. Her other books of poetry are Hineni(Finishing Line Press, 2003), Meanwhile (Finishing Line Press, 2005) and Bedrock (Pecan Grove, 2011). In addition to poetry, she has also published Henry Roth: The Man and His Work and co-authored Passion and Craft: Interviews with Fiction Writers. A long-time, award-winning professor of English at the University of Texas at San Antonio, Bonnie Lyons has also taught and lectured in Greece, Italy, Spain, England, and Israel.