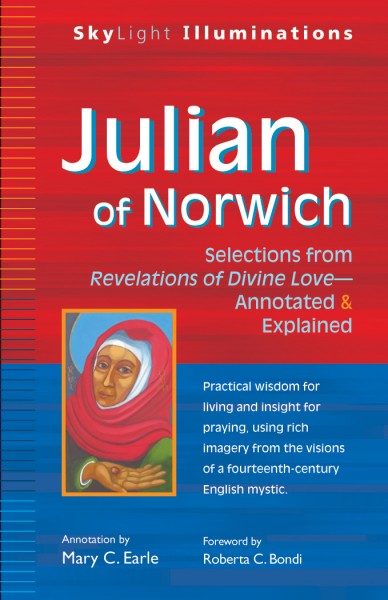 Many people are familiar with the phrase “All shall be well” but do not know much, if anything, about Julian of Norwich, the fourteenth-century English mystic who wrote those words. Thomas Merton declared her to be “without a doubt one of the most wonderful of all Christian voices,” and former Archbishop of Canterbury Rowan Williams says that her writings “may well be the most important work of Christian reflection in the English language.”

This accessible introduction to Julian’s Revelations of Divine Love, an extended reflection on a series of her mystical visions, includes an informative introduction that addresses the historical, cultural and sociological context of Julian’s life and writings. Mary Earle’s facing-page commentary focuses on Julian’s profoundly hopeful vision of humanity and God, her creative imagery and her rigorous honesty about the spiritual life. Drawing directly from Julian’s text, Earle addresses a variety of topics essential to understanding Julian’s mysticism, including the infinite nature of God, the life of prayer, God’s suffering with us, the eternal and undying life of the should, the motherhood of Jesus and the motherhood of God, “all shall be well” and more.

Mary C. Earle is an Episcopal priest, poet, author, spiritual director and retreat leader. Until her retirement, she taught classes in spirituality for the Seminary of the Southwest in Austin, Texas. Mary has authored nine books; the subjects include the spirituality of living with illness, rule of life, Celtic Christian spirituality, the Desert Mothers, and Julian of Norwich. Mary has offered presentations and retreats in a variety of ecumenical settings, including conferences of the Academy for Spiritual Formation, Spiritual Directors International, the International Thomas Merton Society and hospice organizations. She has written articles for a variety of journals, including Presence: the Journal of Spiritual Directors International, Radical Grace, Reflections, and The Lutheran. She was included in the Living Spiritual Teachers project of Spirituality and Practice.

Julian of Norwich: Selections from Revelations of Divine Love – Annotated and Explained