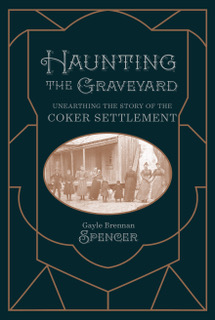 *Preorder your copy now! Expected to ship in September

*This is special pricing for the pre-order.

Inconspicuously tucked away north of Loop 410 and in the shadow of Wurzbach Parkway in San Antonio, the Coker Cemetery contains the graves of more than 600 people. Several Texas Ranger and Texas Historical Markers serve as obvious signs this turf is fertile with stories. Beginning with the arrival of Americans on the eve of the Texas Revolution, Haunting the Graveyard: Unearthing the Story of the Coker Settlement offers a regional perspective of a century of Texas history.

While a schoolhouse and Methodist church served as anchors for the Coker Settlement, men who went off to fight in bloody battles of the Civil War, spent months pursuing Indians and herded cattle and horses northward, found settling back into everyday farm chores difficult. Struggling to survive, families battled rattlesnakes, endured extended droughts and suffered through the Great Depression.

Many overcame these obstacles, only to find their rural lifestyle vanquished by San Antonio itself. As the city grew, increased demands for housing convinced some to sell. Roads to reach new homes chopped up dairy farms with wider and wider ribbons of asphalt, and airport runways buried fields.

The headstones in Coker Cemetery are almost the only evidence of the former farming community, but the tales of its residents are rich. Expect to encounter some heart-breaking tragedies, a bit of mayhem and even an unsolved murder as their lives unfold on these pages.

Haunting the Graveyard: Unearthing the Story of the Coker Settlement