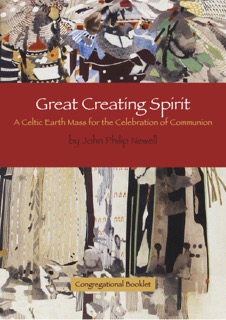 Sold as a package of 10 booklets

A celebration of communion and spirit, this congregational booklet and leader’s guide finds language for today that expresses the desire to move back into relationship with the earth. The leader’s book is suitable for the celebration of communion in large or small congregational settings, and contains three distinct versions of the Celtic Earth Mass, as well as musical resources to be used in accompaniment with the words. It is also ideal for personal prayer and devotion. John Philip Newell acknowledges the three influences behind his latest release: Teilhard’s daily practice of celebrating communion in the great cathedral of nature first inspired him to put pen to paper; the Celtic practice of praying in relation to earth, sea, and sky that offered him a new-ancient language of prayer; and his respect for the earth-honouring wisdom of Native American spirituality that inspired him to clothe this book in imagery that emulates that wisdom. This book is an offering to individuals and communities within the Christian household who are longing for a new language to celebrate their love of the earth. “These twin loves are primary features in the rebirthing of Christianity for today,” says John Philip Newell.

Harmoniously accompanying the prose of John Philip Newell is artwork by Brenda Kingery. Her paintings are illuminated by alchemies of her own: earthen colors brightened by bright yellows, tints of greens, touches of mica, rays of light. Her work vibrates with magic vitality, astonishes by its affinity with dance, music, and its spiritual intensity. As an artist, Brenda sees life as textural patterns that can be described as narrative symbolism. Having as many as 25 layers of paint, her goal is to create paintings full of life’s breath. Just as with her Chickasaw grandmother’s stories, every culture captured in her paintings gathers to sing and dance. Born in Oklahoma City, Brenda is a member of the Chickasaw Nation, is the founding member of the Threads of Blessing International and travels to Honduras, Mexico and Uganda to teach textile and design in workshops that encourage women in developing countries to use their indigenous artistic skills. In 2007, Kingery was appointed by the President of the United States to the Board of Trusteees of the Institute of American Indians and Native Alaskans in Santa Fe, New Mexico. She is mostly inspired by her native culture, but also by Asia, where she lived for several years, as well as Africa, where she has travelled extensively. As Brenda rediscovered her Scottish roots, she felt a close connection to the work of Ali and John Philip Newell and was generous in her participation in donating her work to be part of this project.

Brenda Kingery’s beautiful painting used in this book, Waiting, is available as a signed, numbered, and limited edition print. Only 100 in total will be available; two thirds of the purchase price will go to the work of Heartbeat: A Journey Towards Earth’s Wellbeing, the 501(c)3 foundation that was formed to come alongside the ministry and vision of Ali and John Philip Newell. Each print on fine art paper is 17×16, unframed. To purchase, please email contactinfo@HeartbeatJourney.org.

Great Creating Spirit: A Celtic Earth Mass for the Celebration of Communion