Around a Greek Table 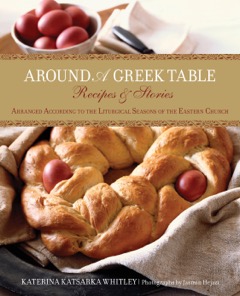 Kefi, loosely translated, is the Greek sense of joy and is often found around the dinner table during large and boisterous family meals of spanakopita, keftedes (Greek meatballs), and much, much more.

Around a Greek Table explores the intricacies of Greek cooking and makes these once-mysterious recipes both understandable and possible. It also delves deep into stories of Greek life and kefi around the dinner table. The 100 recipes — from Oven-baked Lamb with Potatoes to Zucchini Fritters to Triple Moussaka and more — are organized around the Eastern Church’s yearly seasons, each interpreted in one of eight chapters, with historical and personal essays exploring the ancient stories that are told around Greek tables in the honored tradition of combining myths with food.

“Katerina’s love for cooking demonstrates her passion for life. Her recipes exemplify the warmth, tradition, and generosity of spirit found in Greek culture. This is truly a mouth-watering journey!” — Missy Watson, The Best Cellar Restaurant

Katerina is a native Greek who never lost her connections to Greece. Her freelance writing on Greek culture, took, and travel has appeared in the News and Observer, the Catholic Middle East and other religious journals.

Around a Greek Table: Recipes and Stories, Arranged According to the Liturgical Seasons of the Eastern Church